On Sunday, September 27, 2020, the World Muslim Communities Council organized virtual conference entitled "Role of Islamic Leaderships in Confronting Phenomenon of Hate", with the participation of about 20 scholars of high-level Islamic leaders from European countries and others. The participants discussed the phenomenon of hate speech, its causes, and how to prevent and respond to it, including achieving good citizenship for Muslim communities in their countries and fulfills the requirements of belonging to the religion, within an atmosphere of harmony, love and tolerance. 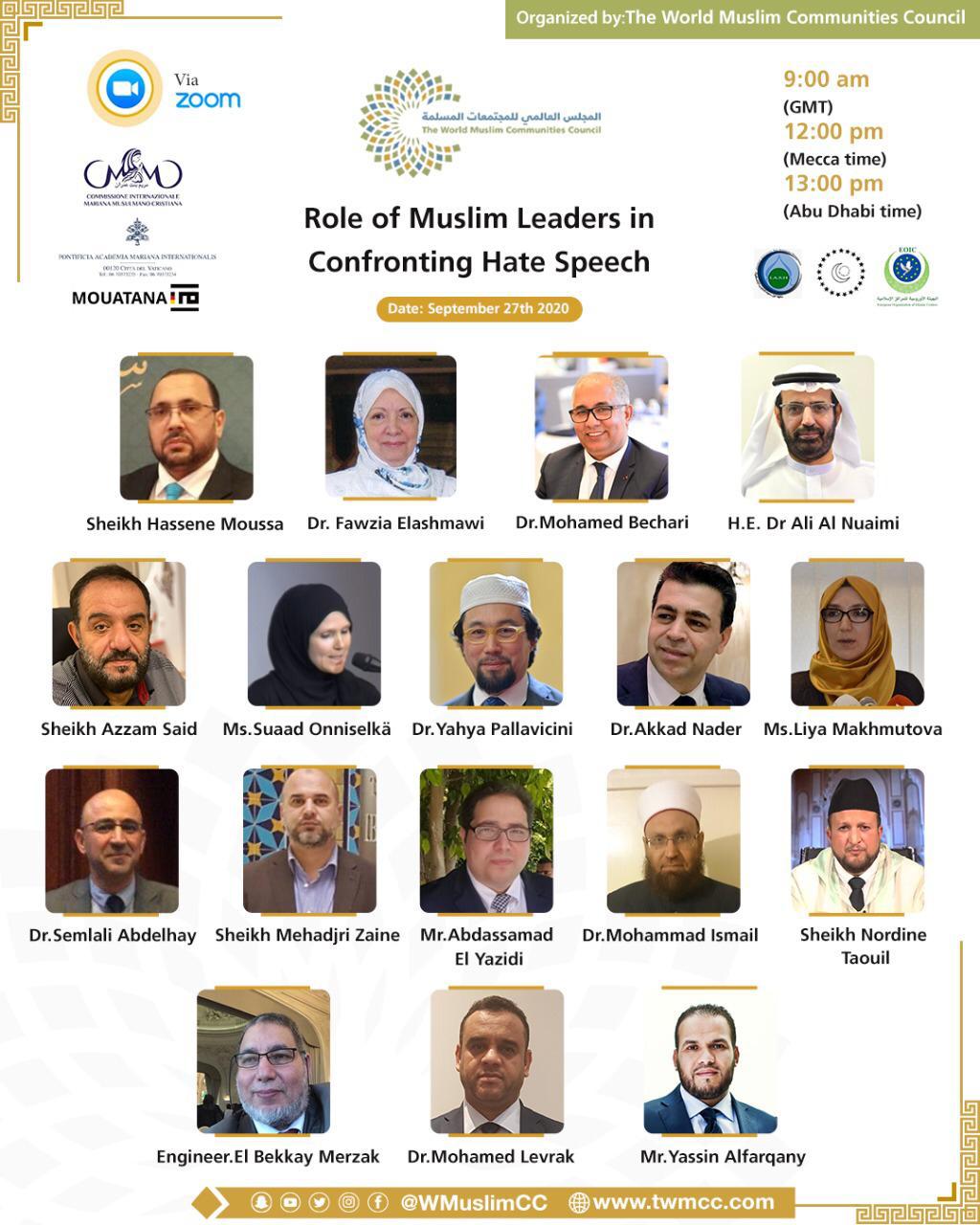 In his opening speech to the conference, which started at 9 am GMT, His Excellency Dr. Ali Rashid Al Nuaimi, Chairman of the World Muslim Communities Council, indicated the importance of the issue of confronting hate speech, because it targets Islamic values ​​first and then human values, stressing that Muslim Communities faced with many challenges, as a result of diversity of it, and using of hate speech in the service of external agendas. He is calling for dealing with hate speech as a religious duty, as Islam is a religion of love, compassion and mercy, even with our enemies and those who disagree with us.

Al Nuaimi affirmed that hate speech exists in all societies, religions and components, and we must unify our attitudes on this speech regardless of its roots and sources, explaining also that the discourse of exclusion, hatred and harming the other will returning to us. He is stressing on the display of wisdom and sophistication, application of objectives of the Sharia and to distance ourselves from dealing with emotions and excitement, in a manner that preserves the rights of Muslims and non-Muslims. He concluded with the necessity of facing provocative acts within the framework of law and wisdom, to highlight the positive and responsible role of the Muslim community and to ensure national cohesion, achieving social peace and serving the supreme national interests . 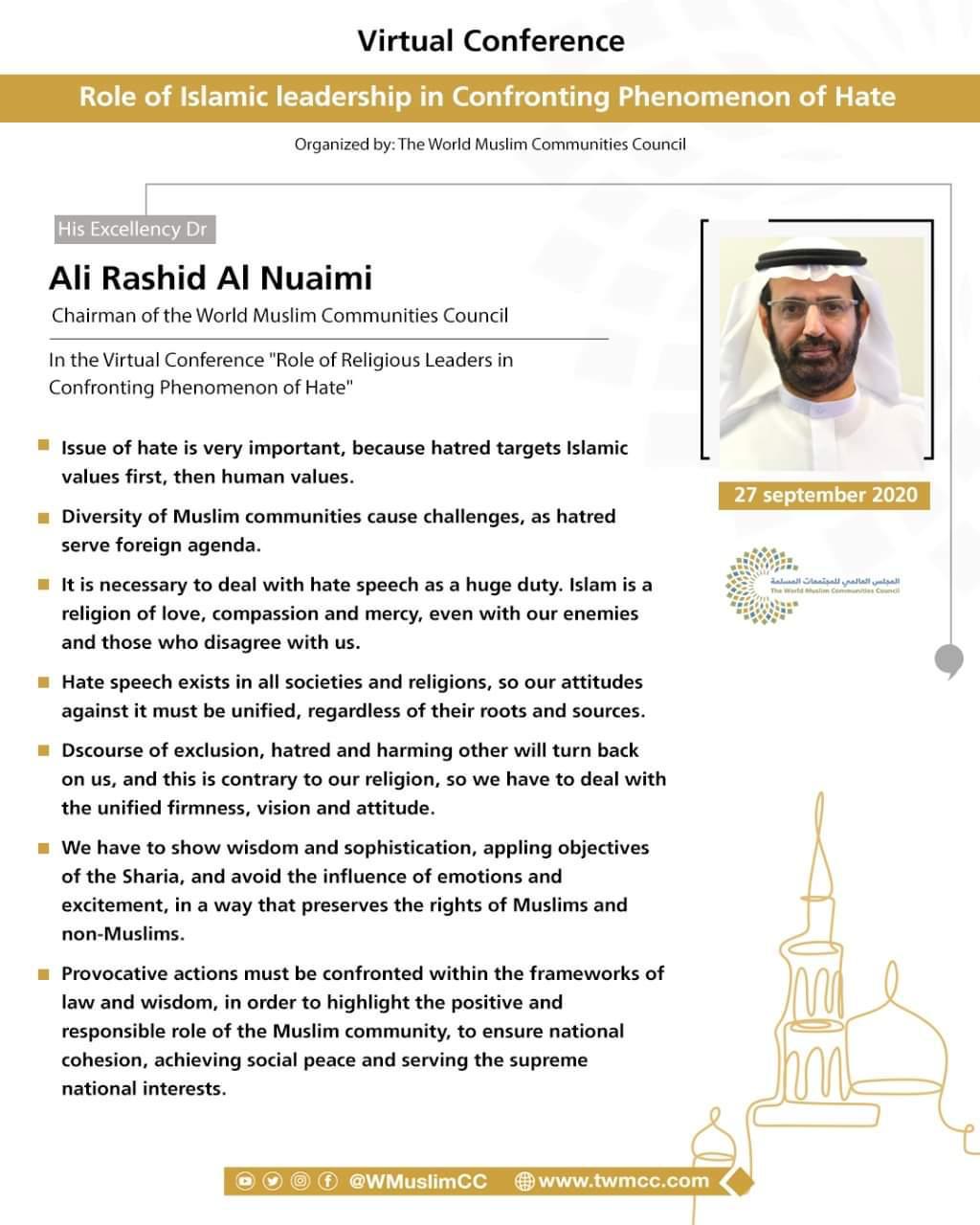 Dr. Mohamed Bachari, Secretary-General of the World Muslim Communities Council, said that hatred is an unnatural phenomenon accompanied by isolation feelings and the non-acceptance of other's cultural, religious or ethnic specifics, so to confronting it requires intensifying efforts of the relevant institutions and cooperation of Islamic leaders. He speaks about the necessity of correcting the image of Islam in curricula and media, and the self-review of religious discourse in our institutions, taking into account the temporal and spatial circumstances of our present, not to forget activating criminalization of electronic terrorism, especially the UN Resolution 65/224 which states legal criminalization of contempt of religion. 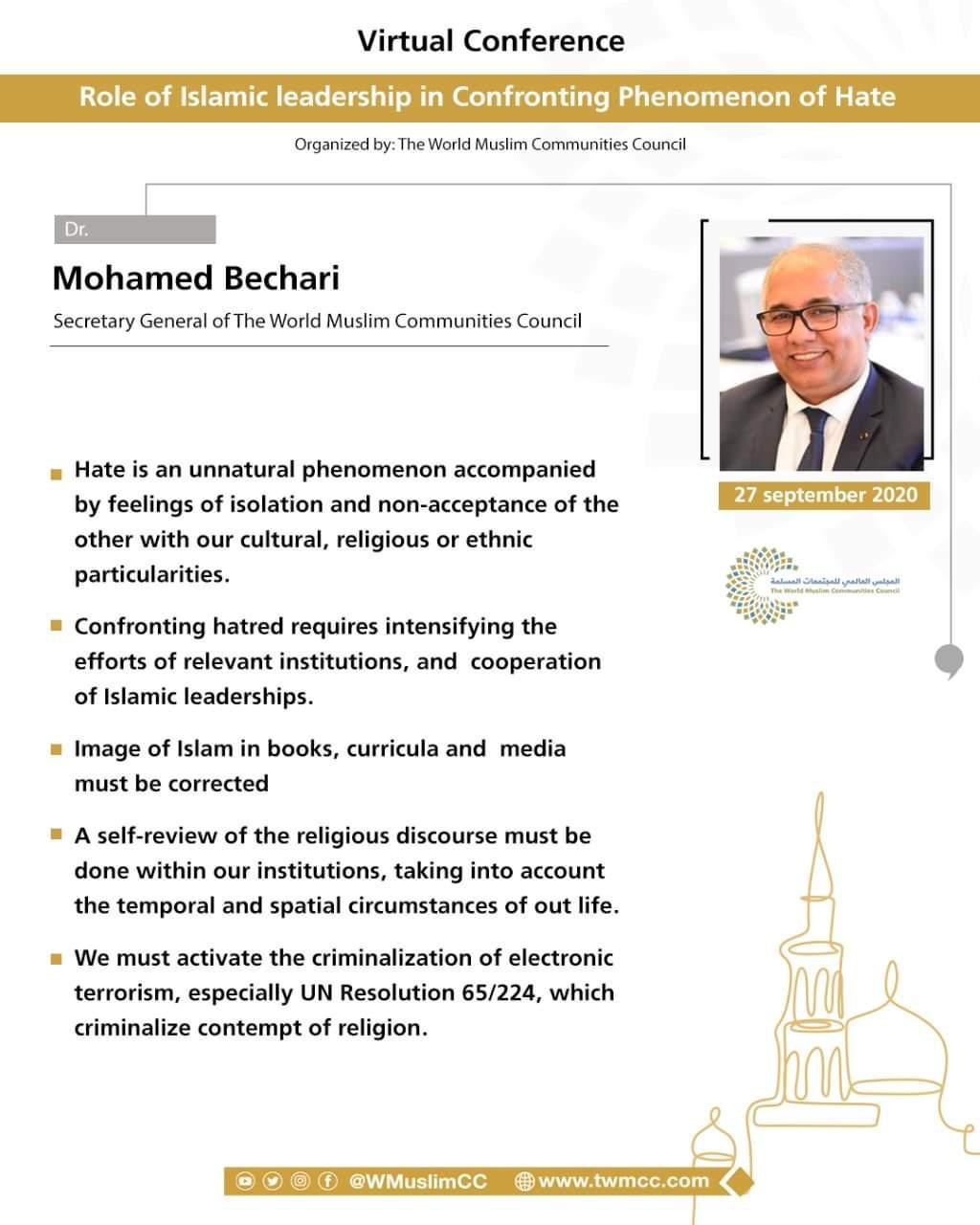 Sheikh Saeed Azzam, Chairman of the Swedish Fatwa Council, expressed the pride of the Muslim community in his country for good citizenship, saying: “In Sweden, we do not consider ourselves refugees, but rather we integrate with Sweden values ​​and customs to enrich them with our religion, values ​​and morals.” He is stressing the necessity of Confronting olhate speech with a civilized Islamic discourse, as the Qur’an calls for mercy to all people. Responding to the event of burning the Holy Qur’an in Sweden, Sheikh Azzam explained that they distribute a thousand copies in every place where the Holy Qur’an is burned. He said and that even if we are attacked, our book does not accept assault to the attackers, valuing the stance of Sweden and its positive dealings with the incident, explaining that they kept the person who burned the Qur’an from being harm.

Mr. Abdul Samad Al-Yazidi, Vice President of the Mwatana, the German Institute for Dialogue and Understanding, referred to a statement by the German President in which he warned about the spread of hatred and racist among German society in a dangerous and immediate way, stressing that Muslims should have a therapeutic and preventive role. He speaks about (Side by side) initiative that embraces high-ranking religious and political leaders, and the“ Abrahamic Forum”, which aims to highlight the spirit of religions under the roof of comprehensive citizenship.

Dr. Yahya Pallavicini, President of the Islamic Religious Community in Italy "COREIS", called for confronting hate speech by developing concept of human brotherhood, stressing that this human brotherhood is one of the most prominent success stories in the UAE in cooperation with the Vatican and Egypt. He called it one of the solutions that must be developed with new skill to counter the hatred speech, explaining that Muslim societies have to bear their internal responsibilities, which are represented in self-correction to avoid radicalism, focus on citizenship; As well as external responsibilities that are represented in developing the concept of human brotherhood with everyone.

In her turn, Ms. Lia Mahmutova, President of the Muslim Women's Union of the Baltic States in Estonia, referred to the religious and humanitarian principles that they follow in Estonia, through the actual embodiment of the principle of “cooperate in righteousness and piety” in confronting the phenomenon of hatred by standing up positively and sympathizing with the Holocaust" in her country. She mentioned also to the application of the principle of "argue with them in a ways that are best and most gracious", by functioning the mind before the senses in dialogue with others, confirming that Muslim women in European society face great challenges, especially with regard to the issue of the veil that many women have been forced to take off. She stressed that Muslim woman preserves the family unity with patience and endurance, however they faced with lack of appreciation.

Dr. Mohamed Lafrak, Advisor to the Secretary General of the Muslim World League, said that in the face of hatred, the world relies on the role of Islamic leaders to stop this phenomenon. The role of religious leaders must be strengthened by drafting alternative discourses for hate speech, and calling for strengthening intercultural dialogue, rejecting hatred and producing speeches that incite dialogue. He is Referring to the initiatives launched by His Excellency Sheikh Dr. Mohamed bin Abdul Karim Al-Issa, Secretary General of the Muslim World League to immunize youth against extremism and violence, stressing the need to develop a comprehensive approach centered on people regardless of their ethnic or religious affiliation, linking between political actors, media professionals and academics, and urging youth and women to engage in charitable and collective work.

It is noteworthy that the World Muslim Communities Council is an international non-governmental organization, headquartered in the UAE capital Abu Dhabi. It is considered a think tank to rationalize organizations and societies working in Muslim societies, renew their thinking and improve their performance in order to achieve one goal; The integration of Muslim societies in their countries, in a way that their members realize the perfection of citizenship and complete affiliation with the Islamic religion.

The council seeks, through holding dozens of virtual conferences, seminars and activities, to localize the concepts of religious, ethnic and cultural pluralism, in a manner that preserves human dignity and respect for his beliefs, and establishes the values ​​of moderation, dialogue , tolerance and belonging to the homelands.